The levels of Super Hyperactive Ninja

In past posts, we’ve talked about the different enemies the player has to face, and the items the player can use to make it to the end. But these don’t exist in a vacuum, they combine in several ways to create different situations. This is what “Level Design” consists of.  And this is what we are going to talk about in this post: how we make the levels in Super Hyperactive Ninja.

How the player faces enemies, traps, hazards and uses items also depends on the level’s geometry. A fancy way to say that the shape of the level determines how the player is going to play.

In videogames, there are mostly two types of levels: islands and corridors. You can think about any level, stage or map in a videogame and it will sure fall into one of those categories, or a strange mix of both. You can check out level maps from lots of games in this awesome Tumblr blog.

Islands are levels which can be freely explored. They are mostly used as “arenas” where you can’t exit or progress to the next map until you clear some objective (kill enemies, find some object, etc.). Sometimes, they act as a “hub” from where you can access other levels. Or you can have a giant island acting as a seemingless open world. We’ve seen lots of them at this E3. In Super Hyperactive Ninja we have “islands” (in the Fight Mode we talked about in our previous post or in the Boss Levels). Anyway, we want to focus on the most common levels in our game, the plaformer ones.

Those are corridors, the other kind of level in a videogame. A corridor is a level which main purpose is to go from point A to point B. You can garnish it as you want, put some detours, whatever, but it still is A -> B.

This is what we want in our platformer levels. The player starts on a green door and has to get to the red door before caffeine runs out. Point A to point B.

Designing the geometry of the level

Making a corridor level is as easy as doing this: But that’s boring. Running through the level should be interesting by itself, and we have a nice and fun mechanic: Hyperactive Mode. With Hyperactive Mode we can make the levels more vertical, as the player can climb wals by making wall jumps.

Why do that flat level when we can do this? 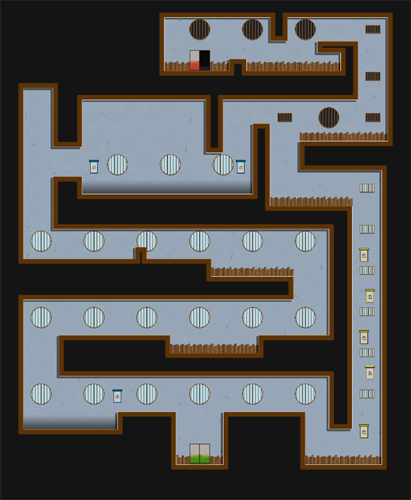 Both serve the same function, but one is a lot more interesting than the other. While the first could be cleared by just pressing right, the other needs you to jump over pits, wall jump, go back, get down a wall, etc. You even have different paths to clear the level.

This seems obvious, doesn’t it? Well, it may be not, because lots of games feature “literal corridor” levels that can be “cleared” by just pressing a direction. With Super Hyperactive Ninja we want to exploit the way the player interacts with the geometry of the level. We could have made a game where you just run forward and call it a day, but that would be a waste.

Therefore, in order to make the levels more interesting, we also put some detours and shortcuts in there. In fact, there are lots of shortcuts that let you complete them in a fraction of the time, or get special items or a lot of money. These shortcuts can be accessed by revisiting levels with a specific item or by exploiting the game’s mechanics.

So, design tip! Always put something at the end of a detour!

Would you like some toppings with your levels? Let’s talk about hazards

We use hazards A LOT. Hazards are a nice way of complementing the geometry of the level. Apart from being a way to punish the player (hurt or kill), we use hazards to make the player advance in different ways.

For example, this can be crossed just by jumping. Just jump and get to the other side, if you fall you die. Seems complicated, but you’ll be doing this many times

I just made you to solve a situation in a way different fashion that you would if there weren’t spikes in the ceiling. Rad, huh? This is only one simple example.

Next: Enemies, or “What does that guy over there do?”

Of course, a game like ours has to have enemies. Enemies, unlike hazards have artificial intelligence (AI). In our case, the enemies’ AI are a set of simple state machines.

This monk is programmed to turn around each 2-3 seconds, if the monk sees the player, he will shot an energy ball (you can see he has discovered the player because it shows the “!” symbol)

We’ll talk about those when the time is due, now the interest is how we place the enemies to affect the player.

First of all, we shall introduce the enemies to the player. We mostly use the so-called “isolation principle“. This means that the first time the player faces a new type of enemy, this will be on it’s own, isolated from hazards and other kinds of enemies.

Hmmm, a doggie… What does this d- OH IT RUNS AT ME!

This way, when the players find this enemy, they can “toy” with it, check what it does how it interacts with the environment and how to avoid or kill it.

On top of that, we try to make this introduction early in the level or near a checkpoint. If the player finds a new enemy, chances are the enemy kills the player. Putting a checkpoint near this “first encounter” allows the player to quickly reach the new threat and try a new way to overcome it. We do this mostly exclusively with enemies, as hazards are more obvious.

This is the first time I encounter these enemies. Let’s pretend I cannot read and follow instructions. Oh damn! Well, I can try again

Once the enemy has been properly introduced and the player has learnt how to deal with it, it’s time to combine!

We have many types of enemies in Super Hyperactive Ninja, and they come in different flavors. So, why choose always vanilla? The same can be said with hazards. Think a Purple Ninja is hard? Try to mix it with spikes everywhere so you can’t dodge those shurikens as easily. The Mokujin protects the monk from Hyperactive Mode. I have to find a way to dispatch it and attack the monk. Is that a box?

By the way, last June 2nd and 3rd we were at Gameboss, an awesome indie game fest in Zaragoza (Spain). There we could test how the players faced these challenges, and the feedback was very positive. Most people said the game was fun and interesting, that levels were hard (hard as b*lls) but fair. And that’s thanks to following these principles we wrote about just now.

We hope you enjoy how we’ve crafted the levels when you play the game. We are always thinking on how to make things even more difficult 😉

As always, feel free to leave a comment or write to us if you want to ask or share something!